Occurrence and Prevention of Spot Disease of Winter Jujube

I. Pathogen of winter jujube

These pathogens are infested on fruit, which is consistent with the characteristics of weak parasites and their ability to cause disease is limited. That is to say, pathogens are mostly infected by the sores of fruit. This is one of the important features of this type of disease.

Symptoms of young fruit: Scabs can infect from the size of fruit beans. The appearance of needle-like light-colored to white protuberances appeared on the fruit surface at the time of the initial infestation, and then rapidly increased. Subsequently, lesions of various shapes were formed. With the development of the fruit, the lesions become larger and cause rotten fruit and fruit drop. It can be divided into four types: red-brown, gray-brown, dry rot and open sores (see figure).

Open sore type: Infected from the size of the fruit bean. At the beginning of infestation, needle-like light-to-white protrusions appeared on the surface of the fruit, and then rapidly enlarged. After the rupture, the thickening of the bacteria appeared, and perforation was formed. The size of the cavity was different, deeper, and the shape was not very regular, and then it was air-dried. Scars, with the development of the fruit, scars become larger. Early prevention and treatment of winter jujube spot disease can get better control effect. The following are the types of pictures after prevention and treatment with different agents. Among them, the use of streptomycin, Dupont Wanxing, streptomycin plus Wanxing and other agents in the early stages of disease prevention and treatment.

If the disease is not controlled in time, the soreness formed by the diseased fruit is the infestation point of the fungal disease, and it is highly susceptible to other fungal diseases. The types of diseases that are frequently infected are rotten diseases such as anthrax ringworm disease (Figures) ) These diseases are the main factors that cause a lot of rot and fruit drop in the later period.

The disease is a newly discovered disease in recent years. At present, some reasons for overwintering and onset are unknown. According to the time of onset and the characteristics of the infection, it is believed that the point of infection that causes the disease is related to sucking-type insects, such as blind deafness. It has been observed that the jujube germination to the young fruit period (late May to June) has a large amount of rain, and the soil moisture content is too high, which can easily lead to the epidemic of this disease.

Judging from the general trend, the strength of the tree-trend is the key to the severity of the disease. The weak tree vigor is worse than the tree vigor. On the contrary, it is light.

The open armor was too large and healed later in the mouth, resulting in weak tree vigor, especially the yellow leaves. The jujube tree with declining growth appeared heavy, and the young fruit had a more prominent onset period. In the young fruit period, the reproductive growth trend is obvious.

Through investigation and research in recent years, there is a certain relationship between top dressing and its onset in the spring, especially the large number of frequent use of urea and diammonium phosphate, leading to imbalance of soil nutrients, and at least one of the factors contributing to the increase of disease.

1. Fertilize fertility, improve soil, strive to increase soil organic matter content, increase the use of organic fertilizers and potash fertilizers, and in particular eliminate and reduce the use of quick-acting chemical fertilizers. In the long-term view, create a favorable environment for the growth and development of winter jujube trees; It is the use of fertilizers before flowering to eliminate the use of pure and readily available nitrogen and phosphorus fertilizers such as urea and phosphoric acid diamines, fully harmonizing the relationship between nutrition and reproductive growth, and striving to create conditions that are not conducive to the occurrence of diseases.

2. Pay attention to timely watering: The use of pre-harvest water can not only meet the fruit set requirements of winter jujube, but also reduce the degree of infection in flowering stages. The flowering period and young fruit period are the peak incidence of winter speckled scab and bacterial scab. In the period, special attention should be paid to avoiding water use during the flowering and fruit-setting period, reducing soil moisture at the peak of onset, and striving to create environmental conditions that are not conducive to disease occurrence.

1. Do a good job in spring buds off the ground, do a good job of prevention and control of overwintering pests and diseases, and reduce the number of insects:

2. Before the bud (from the end of March to the beginning of April), apply 3-5 degrees lime sulfur to the tree once.

4. The prevention and treatment of disease at the time of disease should be based on the occurrence of the disease, the first time the drug should take advantage of the opportunity to prevent and control before flowering. The subsequent medication should be administered once every 10 days according to the specific conditions in the field.

Drugs for prevention and cure: Streptomycin for agricultural use, Kekekang, etc. for the prevention and treatment of bacterial diseases plus 20.67% of Wanxing 2500-3000 times or 40% of Fuxing 8000-10000 times of liquid with 68.75% of Yibao 1500 times of liquid. Azide 1500-2000 times spray control, 10-15 days control once. It should be noted that drugs with different mechanisms of action are used interchangeably to avoid resistance. 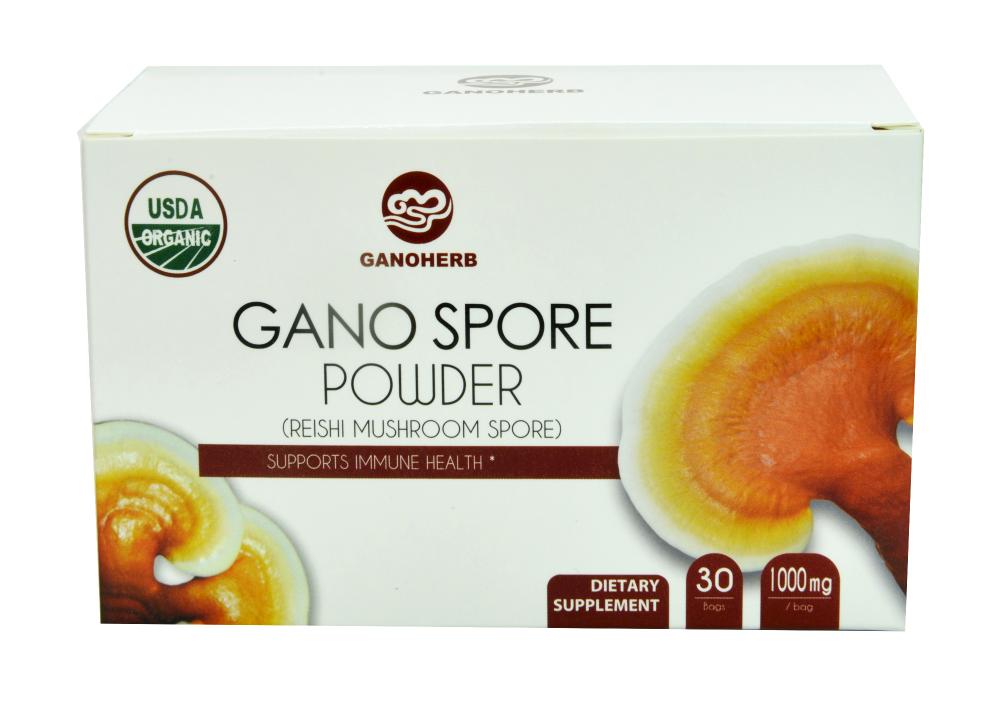 The Ganoderma we used for this product comes from our self-built organic Ganoderma farm at Mt. Wuyi. Both the farm and the GMP workshop have acquired organic certifications from 4 countries and regions including Chinese, Japan, the US, and the EU. We do not use any type of herbicide, pesticide, or chemical fertilizer during the whole cultivation process, delivering the best and safest product to our customers.

By using extraction technology, we can increase the concentration of Ganoderma polysaccharides and triterpenes in the product. Reishi Mushroom Powder polysaccharides and triterpenes both work together to enhance human`s immune system, fighting against diseases and infections. Also, Ganoderma can help protect the liver, increase sleep quality as well as relive stress.